Bluebeam Revu is a document and project management solution designed to streamline existing workflows. This solution can help increase collaboration among project team members in real-time with customizable markup tools. Bluebeam caters to professionals in diverse fields, including architecture, engineering, general contractors, structural steel, oil and gas, government services, plus more. This solution allows users to transform scanned images into easily searchable documents. Bluebeam Revu provides a set of markup tools to add text, notes, CAD drawings, stamps, and highlights to documents. Photos and videos can also be embedded within markups. A markups list on the tool records all markups that are added to a document. Bluebeam Revu's customizable markup tools are conveniently located on a side panel bar where users can add most frequently used tools. These toolsets can be exported and shared with project partners to increase collaboration. Document files can be uploaded to the cloud or proprietary servers and shared with the rest of the project team. Users can also create bookmarks as well as customize hyperlinks and page labels. PDFs created with Bluebeam Revu can be searched by keywords and symbols. Users can log in to Bluebeam Studio to access an existing Studio project or Studio session if an existing account already exists. A Bluebeam Revu iPad app is available. 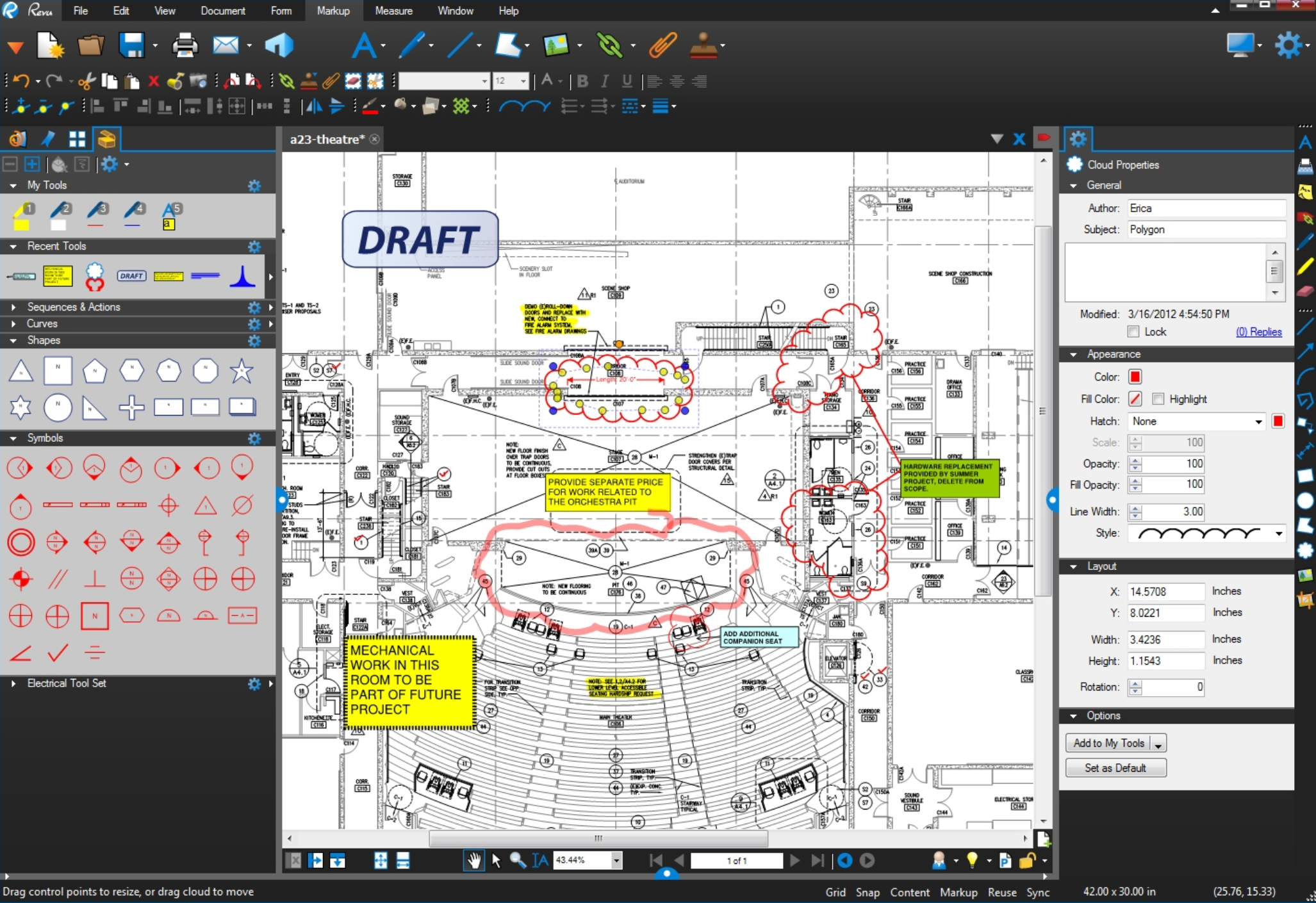 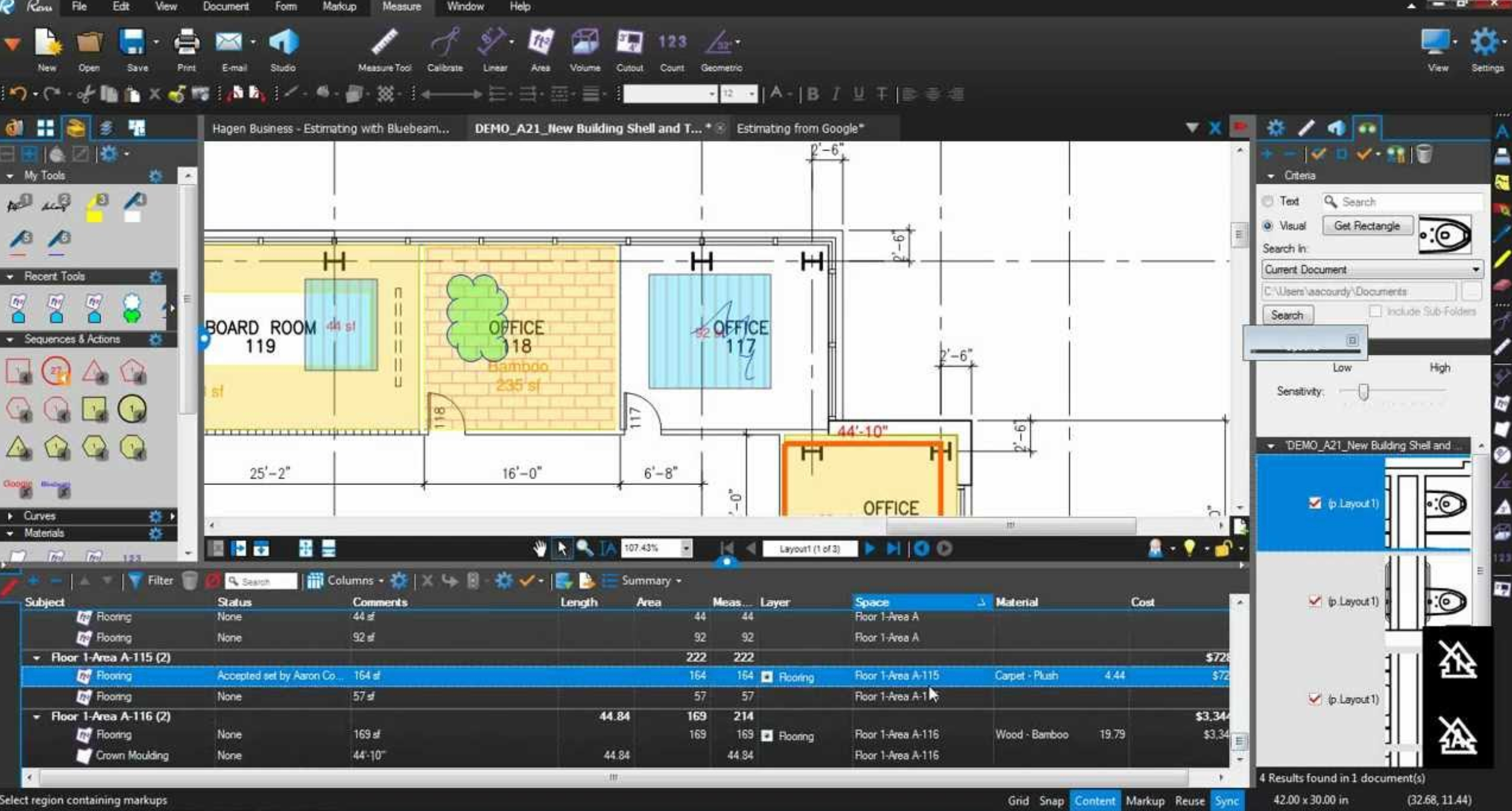 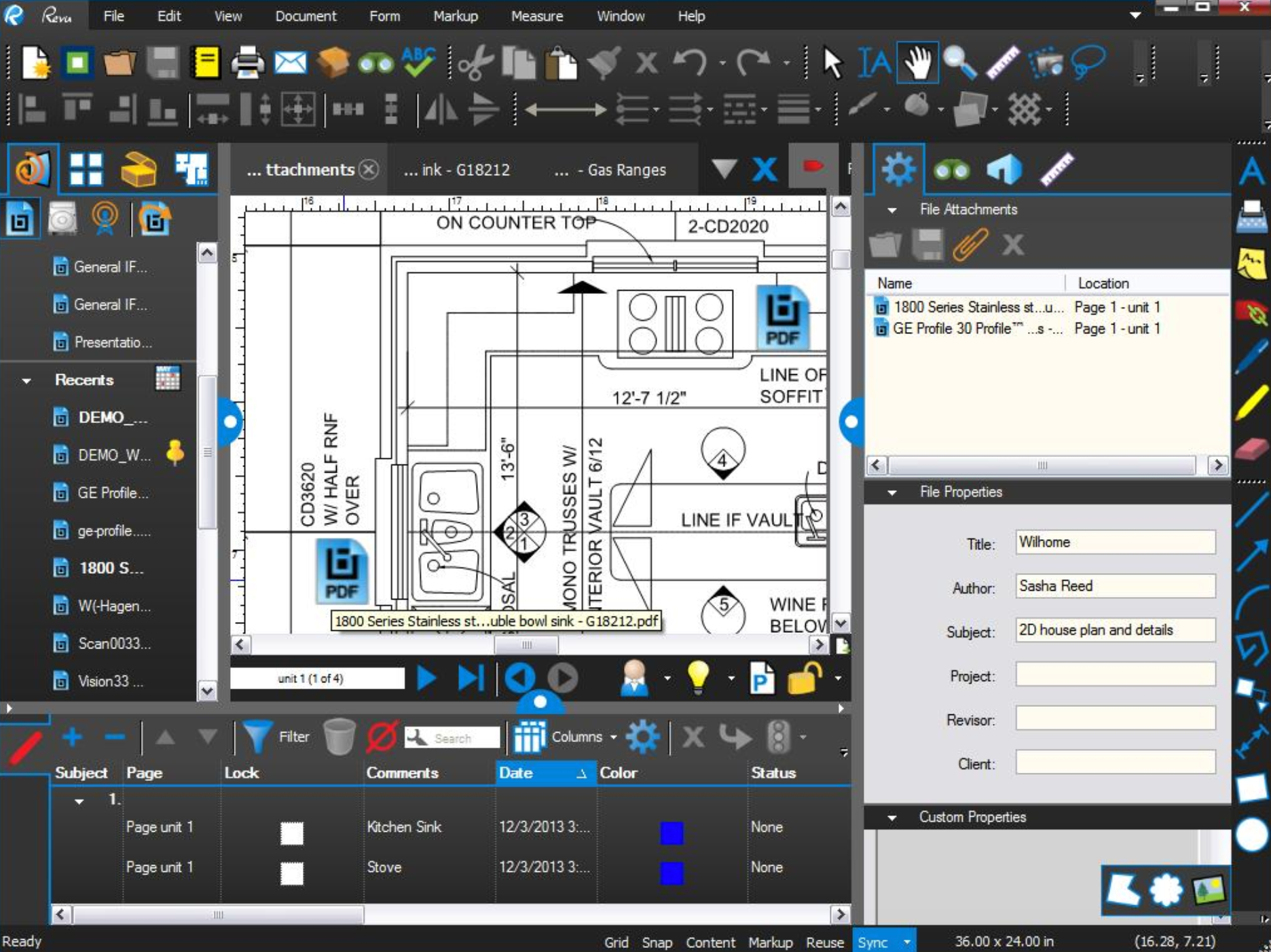 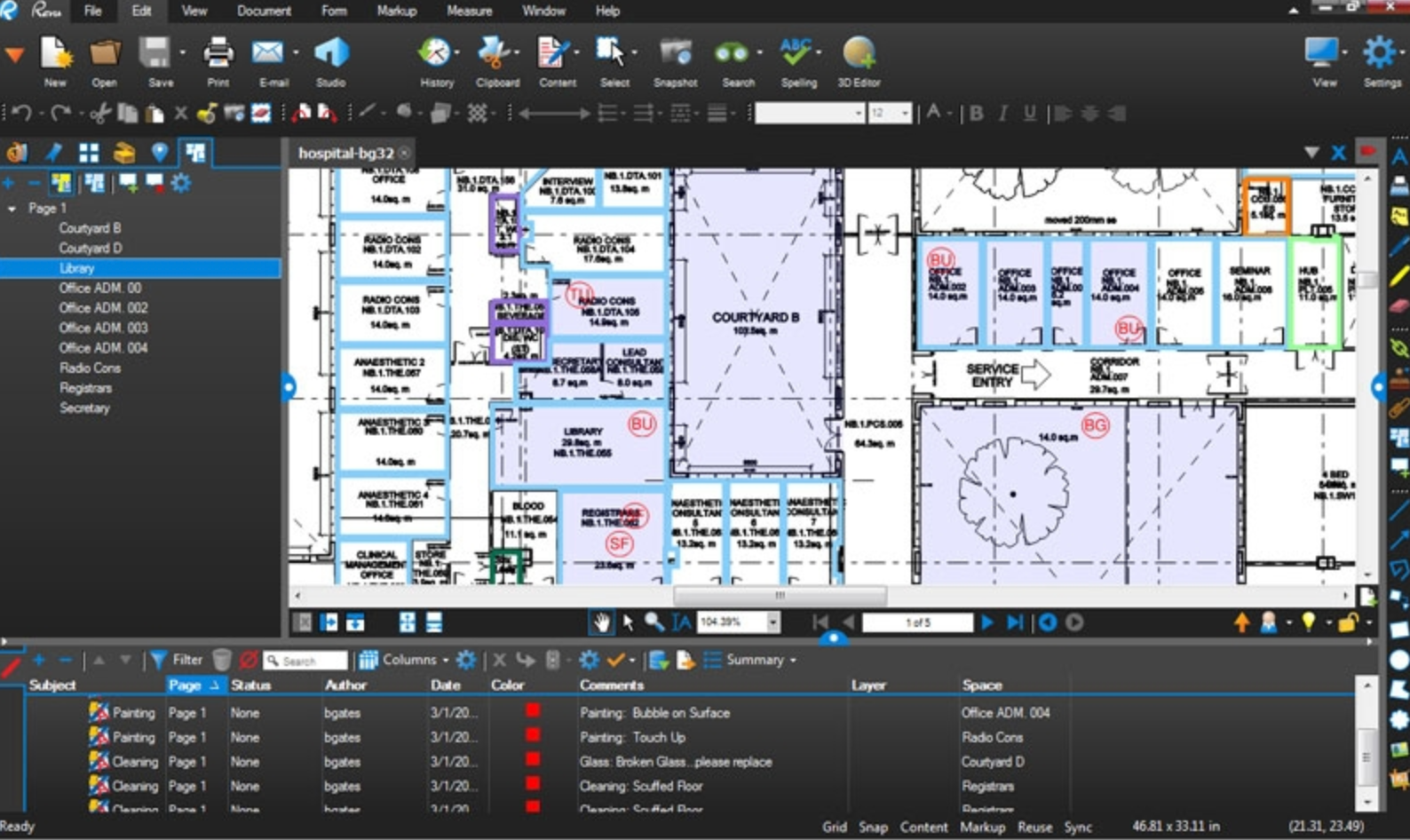 I spend a lot less time posting changes and as-builts, but with much more professional results. I also love the time it's cut down on creating our punch lists and tracking the completion of those items.

I love that it can "read" my plans, and help me with my takeoffs. The search function can look for either words or symbols, and is incredibly useful when I'm looking for something specific.

The different user type profiles are tailored to show the tools and functions that someone in that role would be more likely to use the most. It's easy to switch between these profiles, even when viewing the same file, so no matter what or how many hats I'm wearing that day, it's easy to find the tools that I need for the job I'm doing.

The customizable tool box is great - I can use the existing tools, or create my own! These are handy for posting as-builts, as well as for doing take offs and estimates.

I love all the short cut keys!! Instead of using my mouse to select tool options, I can simply use the "G" key to take a "photo" of a certain part of my open file, or "C" to cloud an area. I use these frequently and it really cuts down the time I spend posting changes to our drawings.

There are so many tools, functions, and options, that you're sure to find everything you need for seamless and efficient construction drawing management!

At first, it was a bit overwhelming to use. There are so many tools and menus that it definitely took a little time to learn; however, Bluebeam offers hundreds of short "how-to" videos on many different topics. After watching these, and using the software for a few weeks, it got much easier.

I have been using BlueBeam for more than 3 years. I have worked as a Contractor, Engineer while using BlueBeam. It has been the greatest tool that Construction industry personal can have. Must buy for Engineers and architects. Bluebeam has saved me tonns of time for editing files/documents and reviewing drawings for construction. I am very happy to have this software on my personal computer as well as work computer

User Interface for Bluebeam is very simple and brilliant. You can clearly see all tools/items that you can use. The ease of access and availability of many editing options very quickly are one of the big time savers.

Only issue that I ever faced is, Bluebeam takes more space on your computer compared to Adobe Acrobat reader. Sometimes it lags in operation if you are using heavy softwares like AutoCAD,/ Revit at the same time. This probably can be fixed by having better configuration of computer. But software maker should really focus on reducing the software file size after installing.

Brings a lot of features and functionality missing from Acrobat. To my knowledge, no other PDF software is geared towards the A+E market. I wish there was another one out there so that these guys didn't have a monopoly on the market. It has given them a sense of invincibility that has led to stagnation and a lack of genuine support for their customers.

I've been using Revu for about 8 years, 5 of those on Windows. The last 3 are at my most recent job, and when I found out that Bluebeam had created a Revu for Mac, I was quick to push our company to adopt. I even gave a lunchtime presentation to show everyone some of the really powerful features I had come to know and love from the windows side.

Playing with the trial version of 1.0, though, I quickly realized that a ton of features were absent from the windows version. I went ahead and gave the presentation anyway, though and with some convincing, we bought seats for everyone.

It became clear within the first week of using the software, though, that it was incredibly slow. So slow as to be unusable. It took several seconds to render every page... considering that we regularly deal with 100+ page architectural sets, this made the program worthless in a lot of cases. What's more we really felt the lack of some features from the windows side, many of which were so basic that it's laughable that Bluebeam decided not to invest in them. You can't crop pdfs for instance.

Anyway, when bluebeam for mac 2.0 came out, we bought in thinking that we'd be getting all of the features that we were missing along with performance improvements. Turns out they decided to revamp the UI with almost 0 feature inclusions. The performance of page rendering was significantly improved, which was helpful, although page thumbnails now no longer load.

Should not be an Option - Should be Mandatory

I can't imagine doing my job without access to Bluebeam. I use it that much. For that many different things.

Bluebeam is so versatile. I can create and/or modify all my RFI's, shop drawings, and detail clarifications from various professional sources - all in one package. I'm surprised at how often I find new ways to make use of the standard tools included with the software.

Bluebeam does have some issues reading some fonts. Not sure what the deal is, but some pdfs show up looking like a crude binary system.

Bluebeam Revu is the best product on the market

Its more than a PDF viewer or an annotation tool. I can do takeoff any project efficiently for estimates with all the assorted program tools. It is the best platform for Constructability Reviews through studio sessions that allows all team players to collaborate with each other to avoid conflict between each engineering discipline.

It's the best software that allows simplicity for any type of project involving engineering drawings, estimating or constructability reviews whether going solo or as a team in Studio Sessions.

I have been using Bluebeam for over 15 years and had never an issue that couldn't be resolved. The support personnel can make magic happen within seconds to solve any problem.